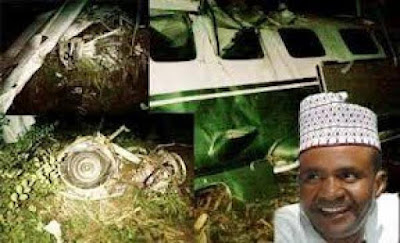 The Accident Investigation Bureau, AIB, has concluded reports on six air accidents and serious incidents which would be released on April 25.
The Commissioner of the AIB, Engr. Akin Olateru, made this known on Thursday in his keynote address at the AIB 2019 Stakeholders’ Forum on “Review Accident Investigation Bureau Regulations 2016 and its Implications for aviation stakeholders”.
He warned airline operators to improve on their safety practices bearing in mind that aviation “is a highly regulated, highly technical and volatile industry”.
Among the reports to be released was the accident involving the former Taraba state governor, late Danbaba Suntai which occurred in 2012.
The Cessna 208B Caravan with registration 5N-BMJ belonging to the late Governor Danbaba crashed on October 25, 2012 near Yola Airport.
The governor survived the crash and he was in and out of hospital both at home and abroad before he passed on five years after in 2017 at a United State Rehabilitation Centre.
Other reports to be released, according to the Commissioner, are serious incident involving Delta Airlines Airbus A330-223 which happened on the 14th of February 2018 when one of its engines caught fire minutes after take-off; Diamond DA40 aircraft belonging to International Aviation College (IAC) Ilorin which occurred on November 25, 2013; Dana Runway incident in Port Harcourt in 2018, among others.
The six reports would bring the number of final reports released by the bureau to 27 in the last two years.
Mr Olateru, who said the bureau charged with the responsibility of investigating accidents and incidents in aviation was not established to apportion blame, charged airlines and other stakeholders to always do the right thing for the sector to flourish.
He said the bureau is expanding its scope by including road, rail and marine transport, disclosing that the amended Act is before the National Assembly.