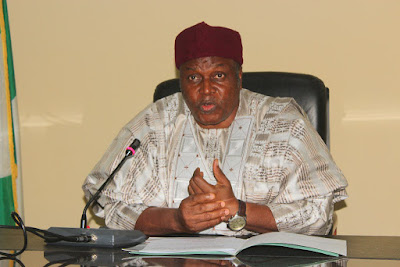 - He travels without transmitting power to deputy


Taraba State Governor Darius Dickson Ishaku has returned to the state capital after a long vacation.

The governor arrived on Tuesday night after residents were grumbling over his long stay abroad and gross violation of the nation’s constitution by travelling out of the country without transmitting power to his Deputy,  Engr. Haruna Manu as required by law.

This constitutional violation had stopped the deputy governor from taking major decisions in regards to state affairs because he was not in acting capacity.
One of such decision is deployment of special security forces to curb the menace of kidnapping to its barest minimum raging in the state.
However hopes are high that the governor would swing into action to address the numerous challenges facing the state particularly high rate of kidnapping and closure of the state university.
Meanwhile Students of the  Taraba State University are already calling on the governor to immediately address the ongoing strike  that have crippled academic learning in the University.

According to them those who set up the committee are aiming to sell wrong narrative on the crisis is between Jukun and Tiv of Benue state.

“In as much as we commend the initiative to constitute a peace committee, we reject in its entirety the non-inclusion of a Tiv person from Wukari Local Government Area of Taraba State in the committee.

“We want to place it on record that Kente, where the crisis started, is in Taraba State and the public should note that Ikyaior, Gbor-Gbor, Iorlumun Nege, Ioryina Tor-Musa and Tar-Orshi among other communities that were burnt down in the crisis by Jukun youths are all in Taraba state.”

The association which said they viewed the non-inclusion of the Tiv people from Wukari LGA into the committee as an oversight on the side of the government of Taraba State called for a review of the committee.

They stated that the non-inclusion of the Tiv people of Taraba State in the committee was a deliberate move by some individuals to sell a wrong story to the public that the crisis is between the Jukun of Taraba and the Tiv of Benue.