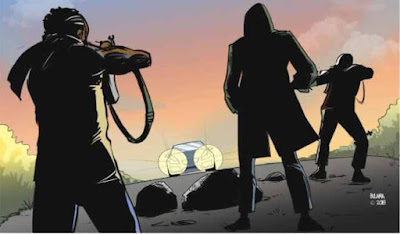 Three siblings and eleven others were killed and properties worth millions of Naira reportedly destroyed in a violence that broke up among two clan in Donga and Wukari local government areas of Taraba state.

Leadership findings gathered that the killings started when one Aondohemba Akpen a youth leader of Ugondo clan and his friend Pinega Ashangaswaa were killed by unknown gunmen while riding on a Motorcycle on their way from Apawa to Wankuu village in Donga local government area.

The youths of the area went on rampage to protest the killing of their leader and the protest became violent leading to the killings of the three siblings of the family of Tarkii.
Leadership visit at Shagogo, a villages in Donga local government also reveal that both clan of Ugondo and Ukum went out to mobilize war lords for possible revenge of the killings, an act that has created tension within the area.

The villagers who were freeing the area at the time of the visit told our correspondent that Shagogo was no more self for ordinary persons to leave in apart from criminals and war experts.

One of the villagers Body Torshuwa said he saw the number of war lords that were coming into Shagogo were alarming, he said he could not stay within the area with his family any longer for fear of further attacks.
The chairman Donga local government council Hon. Nashuka Ipeyen confirm the crisis, he said security have been drafted to calm the area and ensure the return of peace among the people.
Nashuka said as part of peace move within the area, the Chief of Donga has initiated a peace meeting among the two worrying clan, he said himself was on his way from Jalingo to Donga to make ways for peace among the two clan.

Meanwhile, the Kente village, one of the popular villages in Wukari local government area of Taraba state yesterday was engulf with violence between the Tiv and Jukuns.
Kente village is at the bolder of Benue and Taraba states, trouble from the area started when the youths from the two tribes engaged themselves in an argument over a cultural heritage.
The argument generated in crisis that burnt down several houses destruction of properties  worth millions of Naira while thousands of people were displaced.

Though, when contacted, the mobile phone of the chairman Wukari local government area
Hon. Daniel Adi was switched off, Mr. Edwin Tsokwa, a residence of Wukari while confirming the incident to Leadership said the situation has been brought under control.
He also told our correspondent that security has been drafted to the area to control the crisis..